a bunch of us gals get together every month or so for a fun night out: movies, dinner, scrapbooking, jewelry making, painting with wine, 8 course home cooked asian dinner, and so on. we’ve done a LOT of fun things, but i have to say, my favorite so far was one i didn’t initially think i would like – ceramics.

my last memory of ceramics – and it’s been a LOOOOOOOONG time – was of trying to make my mom a pumpkin for halloween. it was back when ceramics meant greenware – which is FRAGILE. i spent i don’t know how much on THREE pumpkins because i kept breaking them! and in the end – NO pumpkin.

so it was a haunting of memories past when i stepped in Clay Casa in august. the halloween pieces had already arrived and there were PUMPKINS! PUMPKINS! of course these pieces are already fired – so they aren’t as fragile – but still!

i also don’t consider myself much of an artist – so the thought of freehanding something was a little daunting. i wandered around, and wandered around – AVOIDING the pumpkins of course – but trying to decide what piece to paint. something not too difficult – but that would be fun. i finally decided on an owl planter. it’s lines were pretty defined so i figured i could just color inside the lines.

after all of us had selected out pieces, we got down to painting, and it was fun. everyone had picked something different, so there were color and style hints being sent back and forth, as well as different techniques.

i found that it was more relaxing than i thought. for best results, we were told to add 3 coats of paint. i’d started with BIG sections on the front and back that i wanted to be lime and aqua – so those were easy enough to do, as was the inside. once a section had been painted, it needed 2 more coats, so that was pretty easy. then came the details – wings weren’t bad, beak and feet were ok. but the eyes were going to take awhile – and time was running out! another friend had selected a large piece, so we decided to come back and work on ours the next week.

the details weren’t really as bad as i thought, and in no time, i’d finished off my piece. of course, i had NO idea what it would look like until it was fired – the colors change and get BRIGHTER when the piece is fired.

here is my owl before firing… 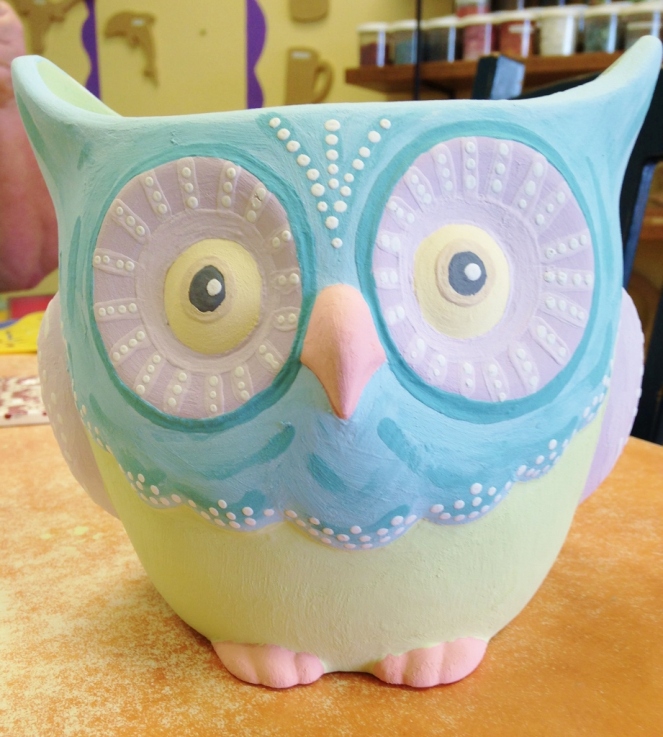 i was a little anxious to see how he turned out and had to wait a few weeks to find out. but when i went to pick him up, i ended up not even recognizing him!

here’s my owl planter after firing… 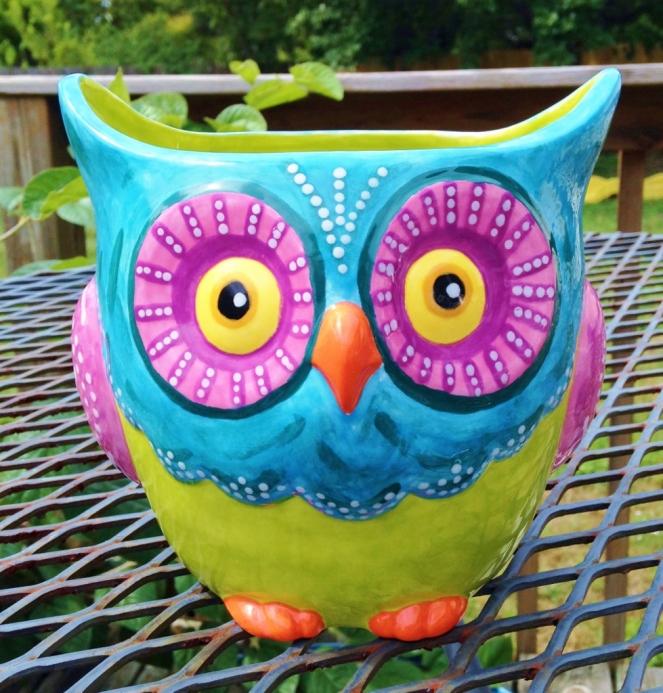 he goes great in my lime green studio! i’m going to use him to hold brushes and tools.

so, now that i am over my ceramics-phobia – i’m all ready to go back! kathy, terri, charlotte, laura, lori, tinka – you ready?! i may even make a PUMPKIN! LOL!

i do or have received compensation, either in monetary and product form, from the following companies: Beacon Adhesives, Clearsnap, Clear Scraps, Grafix, Reminisce and The Crafter's Workshop. i personally used the products from these companies long before i began designing for them and DO believe in their products. any promotion of their products is based on my personal preference for their use. i am NOT compensated for recommending these products on my blog or in my classes.